The Black Swan Discussion at The Aero Theatre 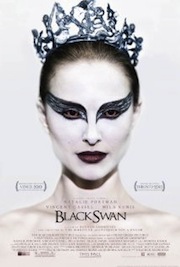 Last night, the good folks at American Cinematheque Los Angeles had another of their Oscar season events. This one highlighted Darren Aronofsky's five time nominated Black Swan film. Shown along side his debut work, Pi (1998), a discussion occurred in between the screenings with the director, DP Matthew Libatique, and film editor Andrew Weisblum. Some interesting back stories were revealed -- I mean who knew the director feared his 90 lb. lead actor more than Mickey Rourke from The Wrestler and how much those characters are alike. It really was another enjoyable event by the staff at The Aero Theatre who gave their usual marvelous presentation to the film fans in attendance at this sold out event. Below is the start of my video recording of the discourse (you can see the rest in parts 2, 3, 4, and 5). For those who haven't seen the film or anything by this director, it is highly recommended. I'll refer to you to two reviews by a couple of my favorite bloggers:

I hope you enjoy.