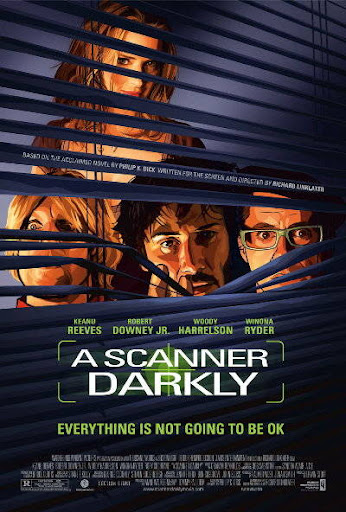 Once again, dear readers, my esteemed blogger companion (Rachel of a Scientist Gone Wordy) and I have ventured into another of our parallel posts where we review and discuss a book at hand, and its film adaptation. She (with the speed reading ability) covers the literary material, and I tackle the celluloid version (since I have no such super-human powers). In this case (like in our first undertaking), it is another of the famed American writer/novelist Philip K. Dick's science fiction stories, A Scanner Darkly (adapted to the screen in 2006). Rachel's review of the 1977 science fiction novel can be found here:

A brief synopsis of the film: In the not too distant future (this one a mere seven years from now... and counting), the ongoing and decades old War on Drugs (which was started way back during Nixon's presidency) has dragged the country down to a new level. The populace is in the midst of an epidemic involving the illegal and addictive narcotic known as Substance D, while government law enforcement has gone the totalitarian (surveillance-heavy) society route in an effort to eradicate the latest drug scourge. The story follows an undercover narcotics cop, Bob Arctor (code named Fred), who is living with a pair of addicts in an attempt to obtain fresh intel on the dealers higher up the supply chain. However, the cop (now thoroughly addicted to Substance D) has begun to lose his hold on his own identity, who he can trust, and the task at hand.

This movie review has been moved and updated to my current blog, which can be found here.
Posted by le0pard13 at 4:00 AM