Why Windows Software Could Use a Rush of Fresh Air--by Randall Stross, N.Y. Times Digital Domain

Randall does a very good stating what a few know too well, and what many could care less about. Microsoft Windows is a bloated, terrible operating system. There's a reason many in business are remaining with XP rather than getting on upgrade train-wreck that is Vista. M$'s latest failed to live up to the hype (when it came out) and the fact that most of its compelling features were stripped out to come in as late as it did. As well, the author makes the case that all of the legacy code that drags it down should be scrapped--ala what Apple did earlier this decade when it brought out OS X. Criminy, it needs to start over!!! Will Redmond do it? In a word, no.
The company is so big and successful that it'll coast for the next version (with the intriguing code name of Windows 7--spare me), and the years to come. So what that it no longer increases it's large lead on the desktop--continuing to lose percentage points each year to OS X and Linux (again, for good reason). Unfortunately, Redmond doesn't know how to lose money--at least for Windows OS and Office (it's got plenty of $-losing experience with its other products). It should start over, but it won't risk it. When Apple did it, it had to (to survive, that is). M$ is more of a successful (AKA, cut-throat) marketing company than a (smart) technology firm. And, marketing companies don't take risks.
Posted by le0pard13 at 2:50 PM No comments:

You know, when an animation studio, like Pixar, has a track record for producing great films, one either worries that the next one can't be as good as those that came, or expects it to be extraordinary. I'm of the latter. This morning, I took the kids and one of their friends to the first (9:30 AM) showing at the AMC Century 15. Man, what a wonderful film. Wall-E, the last idea during a legendary lunch among the creative minds that would stable at Pixar, it is that good. It's part dystopia, part comedy (with a touch of sci-fi/corporate-intrigue), and part love story. Criminy, it doesn't even have any dialog for the first 30 minutes in! Though, it doesn't sound like it would work as a G-rated family movie, it most certainly does. It has simply overtaken all of my favorite films in 2008 (The Bank Job, In Bruge, Iron Man, Get Smart). Now, I'm trying to talk my wife into seeing it (so I can watch it, again).
Posted by le0pard13 at 1:50 PM No comments: 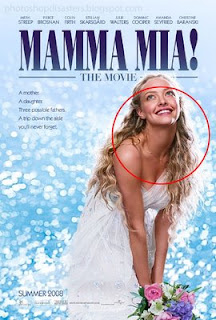 It's always easy when amateurs, like me, mess up using a powerful image app like Photoshop. Hey, it's a given. But, what's downright riotous is when paid, talented professionals do it on a public canvas like posters, ads, and what-not. I hereby recommend, for your entertainment pleasure, the PhotoshopDisasters blog. If you've ever dabbled at misaligning pixels on an image, you won't be disappointed.
Posted by le0pard13 at 9:08 PM 1 comment: 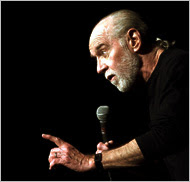 Dead at the age of 71, George Carlin was a genius for his acerbic wit, insights on the human condition, and someone who fought back against the status quo--and was just plain funny, at it. For being the one that began what would turn out to be a landmark Supreme Court ruling (re: The Seven Words you can't say on the air), Carlin said:

"So my name is a footnote in American history, which I'm perversely kinda of proud of."

Addicted to Oil? How About One More Hit?

Friedman does a great job pointing out King George's "massive, fraudulent, pathetic excuse for an energy policy." As much as I hate putting gas into my car, and emptying my wallet in the process, we need this shock to the system to instill the change that'll drive the investments in renewable energy.
And as for Bush II, I can't say it better than the bumper sticker I saw last year:
Worst. President. Ever.
Nuff, said.
Posted by le0pard13 at 8:30 PM 1 comment:

Best wishes to my favorite author, Robert Crais, on his birthday. Elvis Cole and Joe Pike should look as good on their 55th.
Posted by le0pard13 at 8:06 PM 1 comment:

I Knew It! Tiger's Gone for the Rest of the Year 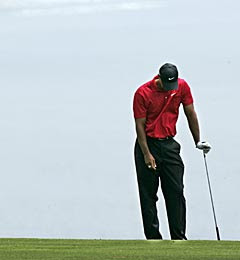 As reported by many news outlets, including the N.Y. Times, Tiger is out for the rest of year. But, if you're going to out, and no one does it better than Eldrick, it might as well be as U.S. Open champion hobbled with a torn ACL and stress fracture of the left tibia! And that's not the real jaw-dropper, here. He tore the ACL last year!!! "Woods said he tore the ACL while jogging at home after the British Open last July." He then proceeded to win the final major (the PGA), and a host of tournament victories--including that god awful, made-for-TV, make-believe-and-mean-nothing FedEx Cup. Expect to see a lot regarding this on the Golf Channel and PGA Tour events. Then, see them and the media promote this guy to the hilt for the rest of the season. Too bad all the extensive preparations that Phil did for Torrey Pines got him zilch (on his home course).

A recent post on Tom Barnett's weblog covered cognitive enhancement via the creation of new pharmaceuticals. An interesting and, perhaps, troubling read--given the human proclivity of abusing substances. Many of such have improved and enhanced life for people the world over. But, equally, many have been shortchanged. Frank Herbert's Dune series, anyone?
Posted by le0pard13 at 3:40 PM No comments: 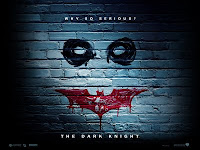 One of the intriguing aspects of the upcoming The Dark Knight movie, besides being just the most true to the comic book movie series in the DC realm, will be Heath Ledger's take on Batman's quintessential antithesis, The Joker. Smart, ruthless, and just the other side of sane. One thing that I caught in watching the recent TDK trailer, was the brief but elegant blade move by Heath around the 1:41 mark. That reminded so much of his similar move with a knife in the 2000 The Patriot film. A brief glimpse of it can be seen at the 1:58 mark of the extended cut trailer found here. The subtle ease of such moves convey the practiced comfort of using a blade as a well-worn tool, to the character's lethal measure with it. Of course, in The Patriot, that move signaled the character's overconfidence as he prepared to dispatch his rival--with a reversal soon to follow. I wonder if director Nolan will use it the same way? God, I can't wait for this to hit an IMAX theater!
Posted by le0pard13 at 10:12 AM No comments: 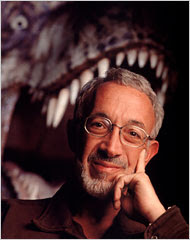 As I get older, it's always shocking when you find out one of the people quietly responsible for many of your thrills on film dies. Such a man was Stan Winston, dead at 62. Even Slashdot is covering this passing. From Terminator to this year's Iron Man, he's delivered on so much special effects fun. He will be very missed.
Posted by le0pard13 at 9:28 AM No comments: 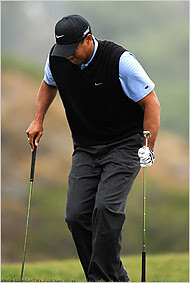 Tiger gutted it out through 91 holes to win this year's U.S. Open! Unreal. One has to wonder if he did more, or permanent damage to that left knee. It's no doubt that many a tournament director on the pro circuit are hurting too, this morning. Many believe, as I, that he's going to be off the tour for awhile. The British Open and PGA Championship in July and August are cringing at this moment. True be told, no Tiger--no high TV ratings (and less ad revenue). And those are the majors. Any of the regular (and thus lesser) PGA tournaments, with no Tiger in the field will give them (and PGA Commissioner Finch) a real ache in their heads and wallets. At least my one prediction turned true: he hit the first hole's fairway in the 18-hole playoff, parred it and eventually won!
Posted by le0pard13 at 8:31 AM No comments:

Took my oldest to the movies tonight to see, "The Incredible Hulk". We were more than a little excited by the results. The studio finally got this one right, with no credit to Angst Lee's very poor launch of this classic comic book super-hero. This one washed out the bad taste of the first Hulk movie. My twelve year old watched that one on DVD a couple of week ago and just shook his head. He and I just couldn't stop talking about the Hulk, afterwards. This one is a close second to our favorite summer movie, so far, Iron Man. Now, bring on The Dark Knight! We can't wait!!!
Posted by le0pard13 at 10:34 PM No comments: 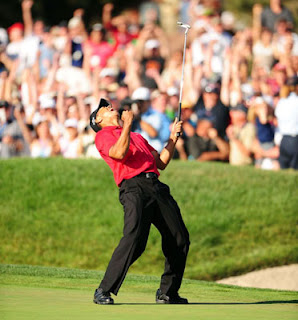 My heart can't take much more. Tiger fights a tough U.S. Open setup at Torrey Pines, his swing, his knee, Lee Westwood and Rocco Mediate to survive (not win) a final round. And the thing, each day, that's trying to kill his chances is the damn 1st hole--he suffered another double boogie right off the bat! If he just boogies or pars that hole for the four rounds, he wins going away instead of having to sink a elephantine pressure putt on the eighteenth green to force a play-off. If he can just hit that fairway tomorrow morning, I know he can win.
Oh, and the Lakers won last night. But, they still managed to build and blow a lead... again. Though my heart is with them, my head knows it's another Boston championship. If only Bynum's injury hadn't been bad, he'd be back and it would be a different story. I'm not exited for Tuesday's game six. If they win that, definitely then, but not before.
Posted by le0pard13 at 10:06 PM No comments:

It's 6:50 in the AM at a desert resort, and it's Father's Day. My wife and kids are still asleep--typical. Well, except for my 8 year old daughter, the fierce one. Her allergies have been giving her a bad time while here. The desert is no friend to her. Well, when all of the kids are up they'll be clamor for going to the pool ASAP. My turn for that this morning--yesterday was my turn and I played golf (typical).
I wish I could come up with something more dramatic for my first blog post, but there it is. Up in the dark, typing and reading by the laptop screen--damn typical. However, I love being a dad, love my kids and she-who-must-be-obeyed (and if she reads that, I'm in so much trouble...). Hope all the fathers out there have a great day, especially Tiger down in at Torrey Pines for today's final round at the U.S. Open. Go Eldrick!
Posted by le0pard13 at 6:49 AM No comments: