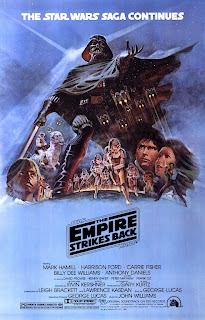 The film blogger over at Colonel Mortimer Will Have His Revenge recently wrapped up his 1980 Project. A personal proposal begun some years ago, my friend examined the lion's share of films for that particular year (and posted on many of them).


"For the last few years I have had a slow moving film geek pursuit. The whole endeavor stemmed from my issues with the annual end of the year top ten film lists. I have nothing against them, I love reading them, though I never regard them as anything close to a true sense of what the ten best films of any given year is, but rather revealing the tastes and personality (or lack thereof) of the writer of said list. Does it contain the prerequisite foreign film that the viewer saw once at a festival and appears on the list pretty much solely in a possessive manner (it's mine, and only mine!), does it contain an out of nowhere mainstream blockbuster to prove the writer's ability to register and enjoy pop art (this from someone who would have included Talladega Nights on his non existent top ten list for last year)? No my issue is with my dogged completest attitude. How could I truly create a Top Ten List if I haven't seen every film released in the year, or at least every film that provided me a modicum of interest or critical attention, since a viewing of say, Wild Hogs, would not have any effect on the process."

The rest of the article has been moved and updated to my current blog, found here.

Email ThisBlogThis!Share to TwitterShare to FacebookShare to Pinterest
Labels: 1980, film, The Empire Strikes Back