The second in the series called The Price of Beauty. Ms Singer outlines the disturbing trend of dermatologists giving more priority in their practice to appearance-improvement patients rather than those with medical conditions. I've seen this, somewhat, for my physician--she opened up a second office a few miles away that was exclusive for botox and beauty treatments.
Posted by le0pard13 at 7:22 AM No comments: 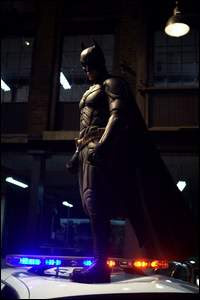 Though we couldn't find (decent) seats in this weekend's IMAX theaters (I'm doing that up right now for sometime this week), my son and I did take in this year's best summer, and possibly best 2008, movie--The Dark Knight. Christopher Nolan's second Batman film far surpassed his first. Everyone in the cast is great in this movie, and the scope of the story is tightly plotted, but honors the mythology of this long-standing comic book series. And though the opposing titans here are Christian Bale and the late Heath Ledger, the whole cast is marvelous--especially Aaron Eckhart as Harvey Dent.
More than few people where wondering why they'd re-run villains from early Batman movies. But this year's Joker's is so far-reaching and menacing (plus, so less caricature than Jack Nicholson's) from Tim Burton's Batman (1989). Add to this, Eckhart's Dent was pure, great Greek tragedy when compared to the disaster Tommy Lee Jones wasted in Batman Forever (and where Joel Schumacher started to wreck this franchise). Everything here was perfectly blended to make one great film. I see now why many critics have sighted other great film sagas (Heat and Zodiac, to name a couple) in their reviews. This movie is appropriately named--it is dark. However, the director, screenwriter, and producers have created one of the best films to have ever originated from that most under-rated of literary sources: the lowly comic book.
Posted by le0pard13 at 8:50 PM No comments: 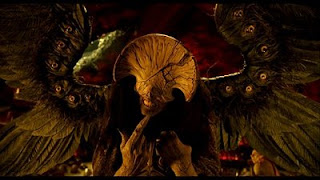 My son and I took this in this morning, and we really loved and appreciated Hellboy II. The visionary director Guillermo Del Toro's film adaptation of the Dark Horse Comics and Mike Mignola superhero. Ron Perlman, Selman Blair, et.al., perform very well in this film. But, it's Doug Jones who steals the movie with his portrayal as the Angel of Death (see image). And while he played multiple roles in the film (including Abe Sapien as the other core player), this creature/characterization  was a stunner. Kenneth Turan, L.A. Times Film critic, said it best, "... the film's Angel of Death...is everything a creature with that name ought to be." Del Toro's visual sense and imaginary creatures are without peer--not to mention Guillermo Navarro's remarkable cinematography. There's a reason executive producer Peter Jackson has lined this director up for the much anticipated film adaptation of The Hobbit. This is a summer movie must see.
Posted by le0pard13 at 7:01 PM No comments: 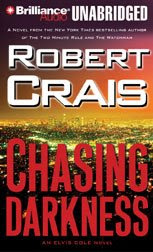 Here I am on the other side of Robert Crais' latest Elvis Cole novel. And, that's always a bittersweet moment for me. The sweet is that this author never disappoints, and EC is a favorite book character (with a well established history). The author always adds some wonderful L.A. background to this series--and even though I'm a native Angeleno, I'm always amazed at what RC digs up and puts down on a written page. I thoroughly enjoyed this book and its Chandler-resque story-line.
The bitter is that this journey is on temporary hold since I've finished this novel (and its series predecessors in my run-up to its release). And isn't it the journey that's the most meaningful aspect of it all? I don't find the completion of a book the prize--it's the immersion one places one's self in between the text and plot. And this one had me with the first sentence--one of the better ones to start in his novels:
Beakmand and Trenchard could smell the fire--it was still a mile away, but a sick desert wind carried the promise of Hell.
Posted by le0pard13 at 5:35 PM 1 comment:

TRUE OR FALSE
We Need a Wartime President

Though our current likes to call himself this, Zacharia spots a clearer reality in this piece. As usual, George the second has gotten it wrong. A key quote:
In fact, America is an extremely powerful country, with a unique and extraordinary set of strengths. The only way that position can truly be eroded is by its own actions and overreactions—by unwise and imprudent leadership.

I'm Ready for the 'Darkness' 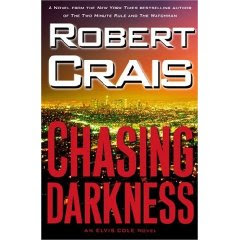 Ever since Robert Crais' new novel, Chasing Darkness, was announced, I've been re-listening to the entire Elvis Cole/Joe Pike series of (unabridged) audiobooks in preparation for it. In order. Finally finished The Watchman this morning on the drive into work. Now, I'm ready to dive in, and I'm so looking forward to reading the latest in my favorite book series.
Of course, when I'm done with it, there will be the inevitable depression of not having a Crais book to immediately look forward to--but the author has promised a new Joe Pike for next year. Still, I expect to delve more deeply into the Jack Reacher and Harry Bosch series to console myself ;-).
Posted by le0pard13 at 5:27 PM 3 comments:

Can We Free Ourselves?

I Freed Myself From E-Mail’s Grip by Luis Suarez, N.Y. TimesBy now, just about everybody knows about email's blessing and curse. The author's attempt at getting away from the black hole effect of it, through the use of social networking tools, is an intriguing one. Of course, he seems to have benefitted from those in IBM management that saw the potential and gave it, and him, the leeway that such a test of change required. Anyway, I've offered it up to my higher-ups as a possible one for our organization. We'll see what it brings.
Posted by le0pard13 at 10:14 AM No comments:

firefox 3 pledge map vs. the pentagon’s new map
Posted by le0pard13 at 3:16 PM No comments: