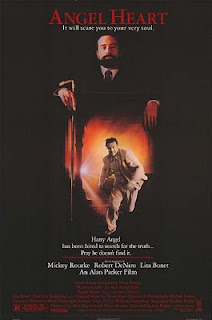 "Alas... how terrible is wisdom when it brings no profit to the wise, Johnny?"

It's still winter, yes? I say that because mother nature continues to toy with those of us in the southland. It's been a false spring for L.A. dwellers of late, and it seems few know that it won't last. It's just a wicked joke waiting to be played (this after a weird and very wet Fall). I don't expect to get much sympathy on this point from much of the country given what many have gone through in this cold and snowy January. Still, everyone else is not under constant threat to slide into the Pacific Ocean after a gargantuan quake like us (the fact that we'd be wearing shades and sunscreen when it happens is besides the point). So, it's probably good timing for the Scientist Gone Wordy and I to get the duo post series back on track after the holidays. As usual, the wordy one will examine the text of a famed novel later adapted to film, which I will review. In this case, she'll be looking at the source novel for the 1987 Angel Heart film, Falling Angel. Rachel's book review can be found here:

A brief synopsis of the film: In January 1955 New York City, an archetypical low rent private investigator by the name of Harold Angel hits a jackpot of sorts. He lands a seemingly routine missing-persons case for a wealthy client. It appears some big band singer from years back didn't fulfill a contract with the mysterious vendee, a chap named Mr. Cyphre. It is explained that the crooner was institutionalize long term due to WWII injuries and shell shock. PI Angel's job then is to prove the hospital in question has falsified the records, and using what he comes across, to locate the fellow with the stage name of Johnny Favorite so that a certain 'collateral' can be collected by the patron. The dark elements that the private eye uncovers, and the peril he faces in doing so, will be laid bare in the telling of the tale.

The rest of the review (now updated) can be found on my current blog, located here.
Posted by le0pard13 at 4:00 AM