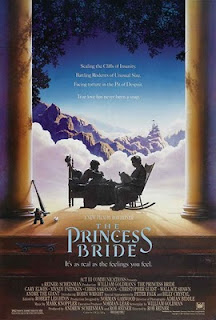 Though my blogging friend Rachel (from Scientist Gone Wordy) and I have done a small number of what I've termed 'parallel posts' (separate reviews of a specific book and its accompanying film adaptation -- not to be confused with this 'parallel' post) this year, they've been solely from the science-fiction category. That'll change with this one, however. I'll review the 1987 film, The Princess Bride, directed by Rob Reiner. My northern California colleague will set her hand (and mind) to William Goldman's source 1973 fantasy adventure novel of the same name. Coincidentally, I happened to pick up the Blu-ray Disc version of the film just before Rachel suggested it as parallel material. You see... great minds do think alike ;-). Her book review can be found here:

The Princess Bride by William Goldman

A brief synopsis of the film: the motion picture opens to a school-age kid, the coughing bedridden variety, playing a vintage video game while he's home sick. All of this to the worry of his mother, and to the lament of his loving grandfather, who's shown up to read a chosen tale to his cherished grandson. The book is entitled The Princess Bride, and tells the classic and adventurous love story of Buttercup and her steadfast beau from childhood, Westley. How true love prevails, through some fantastic perils and danger, is the main story-line of the film.

The rest of the film review has been updated and moved to my current blog, located here.
Posted by le0pard13 at 9:33 PM