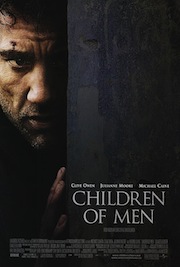 In conjunction with the Scientist Gone Wordy (my good blogging friend Rachel), this is our second parallel posting where the pair of us review and discuss a particular and noteworthy film, and its source novel. In my case, I'll be taking a look at the 2006 dystopian science fiction film, Children of Men. I originally viewed this film in the Spring of 2007 on standard DVD as I did not catch it during its initial (and relatively short-lived) mainstream U.S. release the previous year. For this review, I re-watched the film, after obtaining, the Blu-ray Disc edition of Children of Men that came out in May 2009. SGW's keen eye will examine the 1993 book of the same name by British novelist, P.D. James. Rachel's appraisal of that novel, and her look at the differences between it and the film (one she has a special affinity for), can be found using the link below:

The Children of Men by P. D. James

A brief synopsis of the film: in the future time of 2027, the world of man has taken a decidedly bleak and chaotic turn for the worst. The world appears on the brink of a total societal breakdown. Terrorism and environmental damage are rampant, and the few places on the planet where things are seemingly under control (in the U.K. for this story) seem to have gone the fascist, military control route... big time. The reason for all of the despairing calamity comes down to one significant fact: the 18 years of human infertility. Theo Faron (marvelously played by Clive Owen) is one of the lucky ones -- as defined by the fact that he is a U.K. citizen with a job, and not one of the ill-fated refugees. You can tell the military and politicians consider them the barbarian horde by their less than humane treatment of the outsiders. The Britain that "soldiers on" has become the cold gray sanctuary (and a testament to how bad it is elsewhere). The former activist is content to live out the remaining years of shared melancholy in alcohol-induced drudgery with his handful of friends. At least, before they euthanize themselves. Just about everyone here is in a joyless state. That is, until his estranged wife (the wonderful Julianne Moore in the all-too-short role of Julian) re-enters his life with a proposition to find a way to illegally transport a fugitive ("a fugi") across the police state lines.