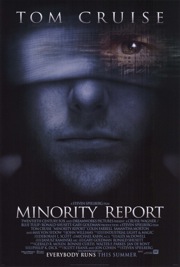 With the encouragement of the very kind Rachel over at Scientist Gone Wordy, I'm writing a post on one of the best sci-fi films to be released within the last ten years, IMO. Minority Report, the 2002 commercial hit directed by Steven Spielberg, is based upon a short story from the famed science fiction writer/novelist Philip K. Dick. For the last few decades, the late and influential author has given film studios plenty to work with in optioned novels and short stories, though with varying degrees of critical, box office, and sci-fi fan success (and that more than likely was due to the manner filmmakers re-interpreted his work). Though I'm sure I've taken in a short by PKD somewhere along the span of my life, I've hardly read any of his written pieces. My exposure to this fine author has been byway of the films Hollywood has adapted from his source material (with varying degrees of alteration). Rachel, whose blog and writing I really admire, has agreed to join me in this endeavor and will be posting in parallel on PKD's Minority Report short story and the differences between it and the film she so loves (see link below):

I think I may have my work cut out for me in keeping up with her (what have I gotten myself into?). Oh, well. My father had a saying he repeated often enough, and it may be appropriate here.