After a busy day of getting flu shots for the kids, attending a classroom school picnic, and a 3-D Toy Story double feature (which I highly recommend, btw) on (the Roman god) Saturn's day, I took some time for myself come Sunday. I left my poor spouse late in the morning to fend for herself, to deal with our children and their homework (seriously, I have no scruples), and I selfishly headed out to West Hollywood to attend an event, all by lonesome.

Just across the street from the Pacific Design Center, at the West Hollywood park, was the site of the 9th annual West Hollywood Book Fair. Previously, I was so clueless about this event and that it has been running as long as it has. This was my first visit to this book fair (and I only found out about it by stopping at author Sophie Littlefield's web site). Brilliant. Pretty soon now, I'll be able to dress myself and find my way to the beach one of these days. That's pretty pathetic (I've only lived in this city my entire life). Sheesh! Anyway, I did make it to this event and really had a great time - mainly for the book panels hosted at the festival, and the people I either met for the first time or the friends/authors I got to hang with for a short while.

From the book fair's web site on its history:

The Book Fair has grown in size and prestige each year since. It is now known as one of Southern California’s most eclectic literary events, and is inclusive of nearly all genres and age levels. The 8th Annual West Hollywood Book Fair, held on September 29, 2008, drew over 30,000 guests, 400 participating authors and artists, 150 volunteers and over 180 exhibitors. The authors appeared in panels, live storytelling and theatrical and poetry performances and in writing workshops on 12 stages.

Luckily for them, they weren't depending upon the likes of me to get the word out before today. How did I ever miss this? Anyway... here are some of the pictures I happened to take while I wandered around the event:

From left to right, top to bottom: that's comic book artist and writer Mike Mignola (right after he signed a Hellboy comic for my teen son), author Charlie Huston (third from the left) at the Ghosts & Goblins: Exploring the Supernatural in Mystery Fiction panel, author Sophie Littlefield (seated center) at the Take Back the Night: Feminism and Powerful Women in Fiction panel, thriller and comic author Gregg Hurwitz (rightmost) at the Wonderful Words & Worlds: New Fiction From Great Writers panel. Author Julienne La Fleur in her Lessons from Oz booth (before she autographed her book for my daughter), and author Charlie Huston (again) attempting to hide from a stalker with a camera. All very gracious and fun people.

Gregg Hurwitz, who I've met more than a few times this year at other events, was the same very

approachable and genuine cool dude he's always been. He autographed both copies of his Vengeance of the Moon Knight (#1) comic for my teen (and I) after his really lively and fun book panel. Charlie Huston, and it seems like all of those who write crime fiction in general have this trait, is very considerate to his fans and the people he meets for the first time (he also wrote for Marvel and the same Moon Knight character that Gregg now has taken up). I was late to his panel, but when I arrived it was very interesting hear his and the other panelists thoughts concerning Richard Matheson's seminal story, I Am Legend, and its impact on their and other's work.

But, the person I came to meet and hear at the fair was simply the showstopper. Sophie Littlefield was as great as bloggers Jen, Pop Culture Nerd, and Corey have written about her and her debut book (yes, Corey, she is somethin'). She's one of those magnetic people that have that rare mix of considerable wit and charm about them while also remaining very accessible. She also hung out with the people below with no qualms, and even showed up to Gregg Hurwitz's book panel just to meet the guy (who knew she's a fan). Plus, she writes crime fiction. What else do you need? Years from now, I can tell my kids I knew her before she got all rich and famous (and bounded off to Monaco for the tax break). It won't even bother me when they roll their eyes in disbelief. I'm really looking forward to finally reading her book, A Bad Day for Sorry (once I pry it away from my wife, who now has it). As well, PCN graciously provided the following shots from yesterday, too: 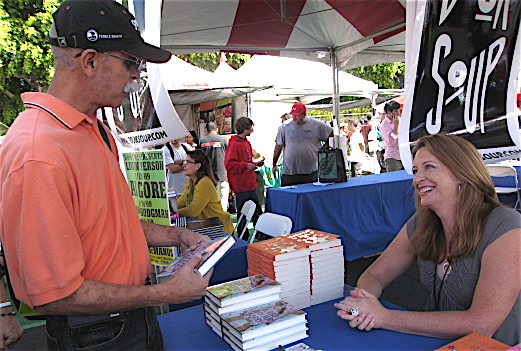 Say... isn't that golfer Corey Pavin talking to Sophie? See, you can meet all sorts of people here in the City of the Angels. Not that you should go by what I know (it seems). But I have to add what really made it an even more special book fair was joining up with the Pop Culture Nerd herself (below and center) and her dear friend (the resident U2 expert, and the one who was in (vicariously) Robert Crais' The Last Detective) Debbie (left). Not only are they both great, interesting, and friendly folk, but they make quite a beautiful and vivacious set (especially when you add Sophie {on the right} to this group), don't you think?: 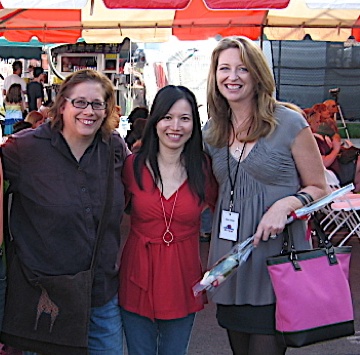 I've always liked that word... 'vivacious'... so rarely have an opportunity to use it in a sentence. [yes, I'm still channeling Kill Bill] And I better stop there because I'm a married man and running around with other beautiful women can cause conflicts. So, after returning home from the event and spreading around the items I picked up at the book fair with the family, life in my household returned to normal. Later, when the kids were in bed, I attempted to resume my accustomed domestic partnership (and tranquility) with my bride of 20 years and tried to thank her (and snuggle) for letting me attend said fair (all while she watched The Next Iron Chef). To which she-who-must-be-obeyed responded:

You know, you have evil children who don't finish their homework. And one of them lies about washing his hands.