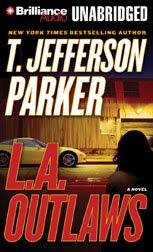 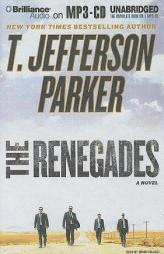 Last year when I attended the annual Robert Crais-hosted panel at the L.A. Times Festival of Books, the co-host for that session was T. Jefferson Parker. He was a new addition--RC has hosted festival panels in the past with known authors like Harlan Coben and Michael Connelly. And, those are always one of the most fun, engaging, and informative sessions at each one. Since I had heard of the author, but never read him, I decided to try his current release at that time, L.A. Outlaws, in audiobook (as is my M.O.). I found the book a more than enjoyable read and its characters, Sheriff Deputy Charlie Hood and the female outlaw Allison Murrieta, beguiling. So much so that I picked up the sequel, The Renegades, soon after its February 2009 release date. I don't comment on many books, and I only post those that draw me in some way or manner. Such is the case here.
Parker, like Crais, writes crime fiction about the people, cops and criminals that inhabit the SoCal region--though of what I hear, in his other works he stays closer to Orange County than L.A. proper. In fact during that particular panel, RC suggested to TJP that the protagonist Hood was worthy of a sequel and/or series. Just about everybody in the audience who'd read it agreed with that statement. The other interesting appeal of that novel is that it details the other law enforcement agency here in Los Angeles, one that's not so high profile like the L.A.P.D.--the Los Angeles County Sheriff's Department. Those of us that live here will recognize some of the Sheriff Department's manner and history in both books. That's also one of the reasons the under-rated movie Tequila Sunrise is my annual treat: it is because of the character Lt. Nick Frescia and the Sheriffs [full disclosure: my sister-in-law is a L.A. Sheriff Deputy].
That brings us back to that sequel. TJP follows up on Hood in this work after all of the excitement in L.A. Outlaws, and its after-effects, in his usual easy going prose. This time, the author makes good use of the much different desert terrain of the Antelope Valley and the drug trade connection between the southland and the nearby Mexican border towns. The problem in this novel, however, is that the character of Allison Murrieta is only a haunting specter to what goes on in between these pages, and no longer dominates the proceedings like she did in the previous book. We're left with pretty much Hood alone, without the shine coming off one of the better anti-heroines in crime fiction (though, I give TJP credit here for such a creation). Without her though, he's just not as complex and compelling.
I wanted to enjoy this work as I did with L.A. Outlaws. Like Crais, Parker gets the southland landscape and its moods down on written word with great ability. And writing about the lesser known Sheriffs adds to that flair. But it just didn't click here like the previous book, to me at least. It's not a bad novel. I'm satisfied to have read it, but it didn't hit the expectation it set for itself with the first Hood novel. That became clear to me during the key surveillance and action sequence that takes the lead character across the border. The author builds it well, that is until a he manages to write such a contrived escape (almost deus ex machina-like). I won't spoil it for you, but if you read the book, I'm interested in other opinions about that one event. Lastly, the author leaves enough hanging at novel's end for an obvious book continuation--whether that makes the author, publisher, or reader happy is the open question.
Brilliance Audio published the audiobook with their usual fine production values. Narrator David Colacci returns for the sequel and performs well. Although, if you listened to the L.A. Outlaws audiobook, you get the more than satisfying experience of listening to David and his real-life narrator/wife, Susan Eriksen, co-read that novel.
Bottomline: L.A. Outlaws - good, The Renegades - not quite...
Posted by le0pard13 at 9:26 AM