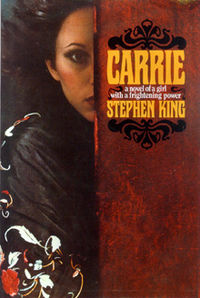 Having become hooked on horror and Stephen King back in the 70s after reading The Shining, Night Shift and Salem's Lot, I sought out his books every chance I got back then. Plus, when I saw what the auteur Brian De Palma did with the film adaptation of King's first published novel, I had to locate a copy of it from the local library. Carrie was actually the author's fourth novel, but the first one published (in 1974). And, it dealt with a subject that continues to haunt our headlines and landscape.

Critic-Filmmaker-Factotum Bryce Wilson (of the Things That Don't Suck blog), recently wrote a wonderful and insightful review of the 1976 feature film (as part of his grand 31 Days of Horror series this year) and nailed that age-old can of worms with this passage:


"It’s a story that I think, has the best chance out of King’s canon to be damn near eternal. Because as long as there are high schools there are going to know what that furnace of rage that can grow in your belly can feel like. And those who imagine what it would be like if they just let it explode (Or implode. Am I the only one to notice that the only difference between the rash of teen suicides that swept the country recently and the rash of school shootings that happened about twelve years ago is that this time the kids are turning their guns on themselves rather then others? I don’t know what this generational shift means. Or if it can even be termed as a generational shift. I just know that either way it saddens and disturbs the hell out of me.)"

The post has been updated and moved to my current blog, which can be found here.